Under Alabama’s Chronic Wasting Disease (CWD) Management Zone Regulation (220-2-.167), all deer harvested in the High-Risk Zone and the Buffer Zone of the state’s CWD Management Zone (CMZ) must be submitted for CWD testing during specific weekends of the 2022-2023 white-tailed deer season.

Suspension of Supplemental Feeding and Baiting Privileges within the CMZ

The Alabama Department of Conservation and Natural Resources (ADCNR) is suspending the use of supplemental wildlife feeding and baiting privileges within the CWD Management Zone (CMZ) which is all of Colbert and Lauderdale Counties. The suspension of supplemental feeding will not apply to bird feeders within 100 feet of a building or occupied dwelling or feed inside an active feral hog trap. Supplemental feeding and baiting privileges will still be allowed outside of the CMZ.

Samples were collected from 966 white-tailed deer harvested within the CMZ during the 2021-2022 hunting season. All samples collected within the CMZ have been tested by the Alabama Department of Agriculture and Industries and the results have been received by ADCNR. Only one additional positive was detected.

The Alabama Department of Conservation and Natural Resources’ (ADCNR) Division of Wildlife and Freshwater Fisheries (WFF) will host a public meeting at 6 p.m. on Thursday, January 13, 2022, to discuss the recent detection of Chronic Wasting Disease (CWD) in a hunter harvested, white-tailed deer in Lauderdale County. The meeting will take place at the University of North Alabama’s Norton Auditorium, located at 550 N. Pine Street, in Florence, Alabama. Hunters are encouraged to attend.

Florence Frozen Meats shall be considered an establishment in the High-Risk Zone for those persons who are transporting, by the most direct route, the cervid parts prohibited by Regulation 220-2-.116.228ER for Lauderdale and Colbert counties. This applies to the 2021-2022 deer season in Lauderdale County for the sole purpose of CWD sampling, processing, and disposal.

All Carcass Movement and Transport Rules in the CWD Management Zone (CMZ) apply for hunters who access Seven-Mile Island Wildlife Management Area in Lauderdale County from any boat ramp located in Colbert County. Carcasses and other parts from deer harvested within the High-Risk Zone (HRZ) must remain in the HRZ. The HRZ is designated as the area west of U.S. Highway 43 in Lauderdale County to the Mississippi and Tennessee state lines and south to the Tennessee River. Seven-Mile Island Wildlife Management Area is included in the HRZ.

A sample recently collected from a hunter harvested, white-tailed deer in west-central Lauderdale County has been confirmed positive for Chronic Wasting Disease (CWD). This is the first case of CWD detected in Alabama’s deer herd.

The sample from the CWD-positive deer was submitted as part of the state’s ongoing CWD surveillance and volunteer testing program. Preliminary tests performed at the Alabama Department of Agriculture and Industries discovered the non-negative case, which was then confirmed positive by the National Veterinary Services Laboratories in Ames, Iowa.

Within the CMZ, there will be no seasonal or daily bag limit restrictions (antlered and unantlered), and no antler restrictions for deer harvested on privately-owned or open-permit public lands in Lauderdale or Colbert counties through the remainder of the 2021-2022 deer season. This also includes the following Wildlife Management Areas (WMA) and Community Hunting Area (CHA), Lauderdale WMA, Freedom Hills WMA, Riverton CHA, and Seven-Mile Island WMA. On those Areas, hunters will be allowed unlimited harvest of deer of either sex daily through February 10, 2022. These changes do not apply to any other WMA or CHA in the state. 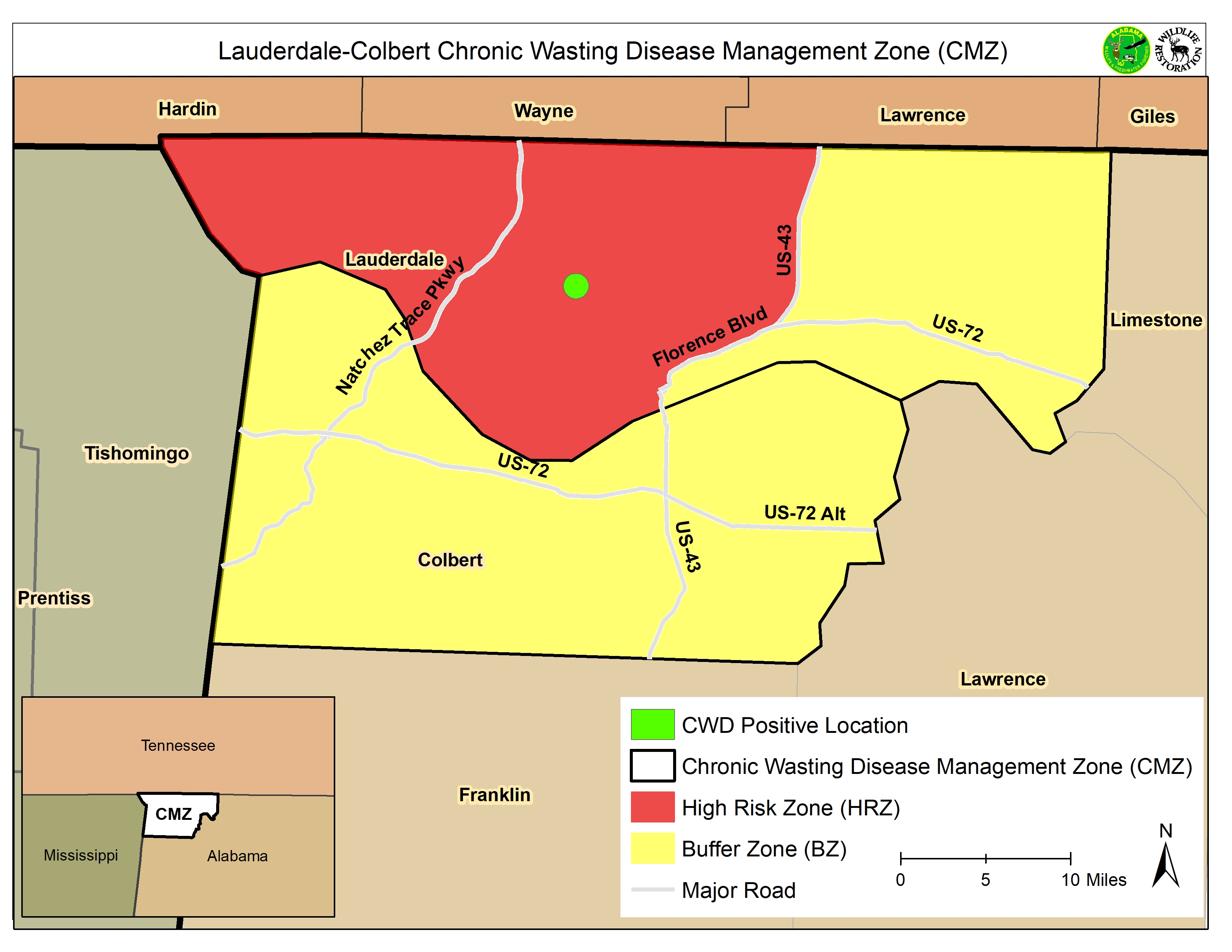